The earliest smith mentioned in Scripture is Tubal Cain, (Genesis 4:22). A descendant of Cain, he was the son of Lemech and Zillah. Because Lamech’s sons each gave birth to a form of civilization (Jabal the father of shepherds, Jubal the father of musicians, and Tubal Cain the father of smiths), he is sometimes considered a culture hero. This is someone who, changes the world through a discovery or who is credited with a change in the way of life, thus creating a cultural shift. (See David’s article coming out next “What is a Foundation Craft”)

Rashi, a French Rabbi from the 1100’s, and author of a comprehensive commentary on the Talmud, has interpreted the name to mean, “he who spices the craft of Cain”. It was also suggested that the name “Cain” means “smith”, and that “Tubal Cain” was used to distinguish him from “Tubal” the son of Japheth.

Richard Coggins, the British Bible commentator, thinks that the name may be a variant of the same tradition which lists Tubal in the “table of nations” (Genesis 10) as a land well known for metalwork.

Scripture lists him as “an instructor of every artificer in brass and iron”. While this suggests that he was a metal smith, verses 20 and 21 suggest that he was the first artificer to work both bronze and iron.  This suggests that he discovered the possibilities of cold forging the native copper and meteoric iron, thus leading some to credit him as an early (perhaps even the first!) chemist.

Flavius Josephus, (The Antiquities of the Jews), said that “Tubal exceeded all men in strength, and was very expert and famous in martial performances, … and first of all invented the art of working brass.” Walter Elwell suggests that his invention of superior weapons may have been the motivation for Lamech’s interest in avenging blood.

Lastly, many commentators identify Tubal with the Assyrian Tubal. These were a people living Southwest of the Black Sea; they were later called “Tibareni”  in Ezekial 27:13. Their principle industry seems to have been the manufacture of vessels of bronze and iron.

Some information from this article was found on Wikipedia, and the International Standard Bible Encyclopedia. 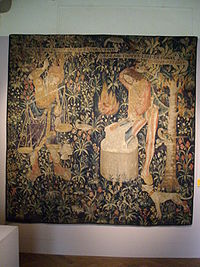 Tubal-cain in his forge. Tapestry in the Musée de Cluny